You are here:
Last summer, the bike lanes on Gabrielino and Owen were eliminated to provide additional parking near Gabrielino Community Park. Adding the parking spaces at the park was recommended by Pirzadeh & Associates, the engineering firm that helped draft the University Hills Transportation Study (Engineering Recommendation A.22).
The loss of the bike lanes raised some concerns in the community. In response, ICHA and the HRB, in consultation with former members of the University Hills Transportation Task Force, asked Pirzadeh to reassess the recommendations with a priority on pedestrians and bicycles over parking needs (see the letter sent to the community and posted on uhills.org).
The engineering firm’s findings suggested several options, including restoring the Class 2 bike lanes on Gabrielino in a 7-11-11-7 alignment (7 foot bike lanes on each side with two 11 foot travel lanes to be separated with a single yellow line) and implementing a Class 4 bike lane with two adjacent four foot lanes, one uphill and one downhill, on the west side of Gabrielino. At a meeting on April 2, the HRB Transportation Committee unanimously agreed to recommend Option 2: restoring the Class 2 bike lanes on Gabrielino in a 7-11-11-7 alignment (see below). Bike lane striping is scheduled to be completed this Summer. Notification of construction will be sent to the community once the work is scheduled. 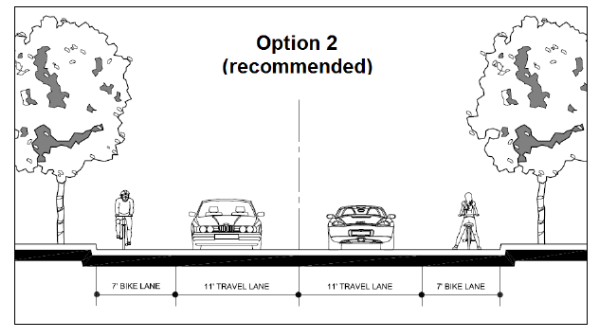